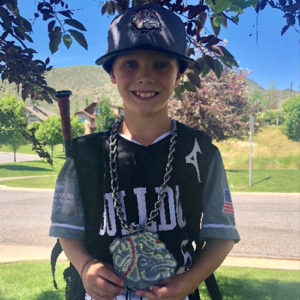 The 8u player of the week is Ty Jackson. Ty has quietly and consistently found ways to help his team on the field. He has been bounced around the lineup and the field and has always put his team first. When we needed relief pitching in a tournament, Ty stepped up and threw strikes. When we were battling late in a game and needed a base runner, Ty was there to get the job done. Ty reached base on almost ever single plate appearance this past week. And when he was on base, he did everything he could to score runs for his team. Though not large in size, Ty has grown into a supportive and skilled defender. He rotated through at shortstop throughout the season and always tried to make outs for his pitcher. At no point did Ty ever back down from a challenge. At no point did he ever complain that too much was being asked. Ty always showed up ready to work and ready to compete – and for that, he is our player of the week. ~ Coach Patrick and Staff