Club Hardball Bulldog Baseball (CHBB) is a competitive Club based in Draper, UT.  We have seven teams ranging in age from 8u to 14u.  Following our Mission Statement of “Providing a Foundational Experience for Baseball and Life,” our Club prepares its players for High School and College Baseball. Although we strive to win every game we play, we will not sacrifice baseball etiquette or fundamentals.  We focus very hard on the fundamentals of the game, respect for the game, and respect for your team mates, coaches, opponents and most importantly parents.  We are a family of baseball players and coaches that enjoy each other on and off the field.

Many of our coaches have played in Jr. College, College, or Major League Organizations. Examples are Utah, BYU, Snow College, College of Southern Idaho, Pepperdine, Hutchinson Jr. College, Wyoming, Cincinnati Reds, Montreal Expos, and NY Mets. Each coach brings a specific area of focus, a wealth of baseball knowledge and real world experience to our teams. Each player and coach are expected to review and operate under the Club Hardball Baseball Manual, Head Coaches Expectations, and Player contract.  Parents must review and sign the Parent contract.  These are more than just guidelines.  These documents represent how we will operate and act as members of Club Hardball.

As a player and coach, I believe baseball is an exceptional tool in developing young men and young athletes. Our facilities are unmatched as we have our own field known as the Dog Pound. The Dog Pound includes a batting cages, pitching machine, soft toss area, tee area, bullpen area, portable mounds, screens, and more.  Finally, we have a gymnasium/warehouse we use in the pre-season when weather doesn’t allow us to go outside.

We are proud of what Club Hardball Bulldog Baseball represents!

Brad Beadles is the founder of Club Hardball Baseball and Michelle James is the Chairman. 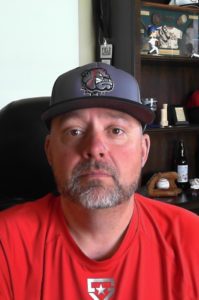 As a Catcher, Third Baseman and DH, Brad played American Legion Baseball in Wyoming for the regionally known Casper Oilers from 1980 – 1983.  Post his Legion days he played for Hutchinson Community College in Kansas who are a notable NJCAA team within the Jayhawk Conference and a repeat qualifier for the NJCAA World Series in Grand Junction, CO.  After his playing days, Brad has the following coaching experience:

Brad started Club Hardball in the summer of 2012.  With his oldest son away in the NFL and his young daughter and son just getting started in sports.  He wanted to give back to the community and make it a family journey.  As Brad states, “the field and facility you see today are nothing like it was when I asked my wife, who is the Athletic Director at Grace Lutheran School, if I could build the field into a baseball field for youth baseball.  Now, I’m proud to say, the Dog Pound is the home of seven teams ranging in age from 8 through 14.  The Dog Pound has a batting cage area,  pitching machines, two soft-toss areas, two bullpens, turf, portable pitching mounds, flat mounds, l-screens, pitching screens, and equipment and tools for developing the fundamentals of our young ball players.  We also have the Puppy Pound which is used for infield and baserunning practice.  Our partnership with Grace Lutheran also allows for indoor training in the gym when the weather is bad.  Additionally, our partnership with the Bees Academy allows us to hit at the Salt Lake Bees facility and practice on the nicest AAA field around.”

Professionally, Brad works for Microsoft Corporation (1999 – present) as a Director within the Incubation Division.  Zane has since retired from the NFL and is awaiting twins with his wife Meredith.  Jill continues to be the Athletic Director and shuttling both Kylie and Kaden to practices and games for Soccer, Volleyball, Mountain Biking and Baseball. Brad asks for anyone to “stop by and visit with us at the Dog Pound… our door is always open.” 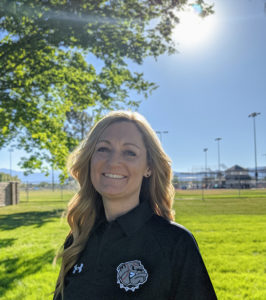 Michelle James has been the Board of Directors Chair since 2015. Michelle has a Bachelor of Science in Exercise and Sports Science and a Minor in Coaching from the University of Utah, and a Masters of Business Administration from Westminster College. She is a member of the Positive Coaching Alliance. Michelle works in the healthcare field as the Population Health Commercial Product Director at Intermountain Healthcare.

Michelle played a handful of youth and high school sports including softball, tennis, volleyball, and basketball. She has also spent many years coaching sports from youth to collegiate. As a coach and a board member, her commitment has remained to provide opportunities for youth to play sports, and to focus on the life lessons learned through sports.

Each coach, player, and parent are expected to review and sign the following documents:

This outlines our Offensive and Defensive Strategy as well as the expectations from each ballplayer and from their parents.

This is an industry article that mimics how we like to run our Club.

This outlines the expectations of our Parents and Families.

This outlines the expectations of our Ballplayers.

This outlines the expectations for our Coaches.